I really want relationships to work, I want them to be places that we can enjoy being in. This is why I commuted back and forth from London to Boston for three years to learn how be most effective in helping couples.  I want relationships to be the best thing about our lives rather than the largest source of pain. As a result I was recently having a conversation with a fellow marriage counsellor and she shared something with me that I found to be blinding in its brilliance. She said, ‘When you think about it, pretty much every argument you have is about one or other of the couple seeking reassurance’. Let me show you why that is so amazingly helpful. 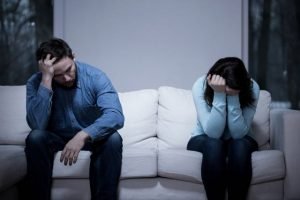 Pretty much every argument in a couple, starts out with a fear that needs reassuring. I’m not just talking about the base level ‘But do you really love me?’ type of reassurance.

Sometimes we just need reassuring that our complaint has been heard, that our discomfort makes some kind of sense or just that he realises he screwed up when he forgot to post your mother’s day card. I really believe that a huge amount of the friction in a relationship is about the fear that one or other of the couple’s core emotional needs are not being taken seriously.

[As a quick aside I talked a lot about the importance of getting your core emotional needs met in that copy of Should I Stay or Should I Go I sent you with your first letter in this series.]

As I listen to my marriage counselling clients about the disagreements they’ve got stuck in it becomes more and more apparent that we just need to be more honest. Something to keep in mind is this. A relationship is made up of three parts, you, your partner and the truth. If any one of those goes missing then so does your connection. It’s my job to get you reconnected and back into ‘fierce intimacy.’

Tony Robbins, self help guru extraordinaire, states that all arguments are based on the transgression of a rule. Whether or not you’re aware of it you have a whole bunch of rules about how people should treat you, especially if they ‘really’ love you.

In newer relationships this is especially tricky as you are still exploring the territory. You don’t yet know your partner well enough to know when you’re stepping over a line that they hold dear. Worse than that, the first couple of times you do it they might not even mention it as they don’t want to make a bad impression or kick up a fuss.

Late for a date.

One of my clients, Jack, recently had an argument with his partner because, as far as he was concerned, she was late for a date. In his head he has a rule that states that if you really love him then you’d respect him enough to turn up on time. His partner doesn’t have this rule. In fact her rule is more like ‘if you love me enough you’d understand that I’m not always going to be on time.’ Jill, his partner (I hope you’ve spotted that for confidentiality’s sake I do change the names) was actually late because she wanted to make sure she looked her absolute best for the date. You can imagine how the conversation went given it was late on a Friday night and they were both hungry.

Do you want to be right or married?

Are either of them in the wrong? I don’t think so. In fact a core belief in Relational Empowerment Therapy is that there is no such thing as objective reality. They just have an issue with two rules that conflict. This turned into a big fight about love and respect and this couple are in no way unique. Couples fight about the strangest things, but you already know that.

If you feel yourself approaching an argument/fight with your partner you would do well to be aware of the different levels of emotion. In my marriage counselling it’s clear to me that most of us have an easy time being angry even if we can’t express it. It’s often our first reaction to feeling like one of our rules or ‘lines’ has been crossed. But in my experience, behind the anger is a sense of being hurt in some way and the thing we’d like to have most of all is that hurt being taken away.

What are you missing?

If you’re feeling hurt there is often a worrying sense that something has been lost or is being taken away. Not only that, there is a fear that this hurt may continue because your loved one doesn’t care.

So imagine if Jack had managed to say there and then that he felt hurt and feared he wasn’t as important to Jill as her other commitments. It would have been much more likely that Jill would have immediately offered up the reassurance that he was seeking. Once Jack and Jill felt more connected they could have a discussion about their differing rules about punctuality and figure out how to handle it better in the future.

This is just one small example but if you start to just take a few moments to think about what is actually being said before you react it’s possible to save yourself a couple of wasted hours or even days. Due to my marriage counselling I’ve had the privilege of spending hours deconstructing what’s really going on for couples in an argument. It’s rarely what you think. What are some of the dumber arguments you’ve found yourself in? Have you had any insights following reading this article? If you’d like some quick fix marriage counselling please read the tips below.

So you argue with your partner. Sometimes BIG arguments! But how do you tell the difference between arguments that can be resolved in a relationship and arguments that indicate that you’re with the wrong man? Take another look at the ‘Five Relationship Crimes’ that could be killing your love. They are so obvious I assure you you’ll be kicking yourself and wondering why you’re still doing them.

I once heard that one of the basic needs we have is to know that our loved one knows without doubt that they are better off with them than without them. This is why threatening to leave the relationship in any argument is a huge challenge to the ongoing security of the relationship.

If you’re a man: understand that you are often more comfortable getting angry than expressing hurt. You stand to gain hugely from learning to admit that you feel hurt when it’s true for you. You are never going to find a healthy woman who will respond positively to your anger so try to keep in mind what lies behind your wrath.

If you’re a woman: without wishing to demean men, I think it’s fair to say that often you will be in charge when it comes to building emotional literacy into your relationship. So if you’re confronted by your man with a face like thunder you might want to ask him what’s going on behind the anger. Getting angry back rarely works, it makes about as much sense as trying to put a fire out by throwing petrol at it.

Sometimes acknowledging that you are aware of a problem between the two of you, even if you can’t fix it there and then, is reassurance enough.

If you fall out with your loved one you can get to feel very vulnerable in a relationship and the sense of disconnection is alarming. Particularly if the relationship is in its infancy.  Remember the mantra ‘we are arguing to come back together!’