One of my couples counselling clients came to me recently very confused about why his relationship seemed to be getting worse, even though he’d been using a ‘Time Out’ tool I’d taught him. He was unconsciously making a potentially fatal mistake

If you’d like to know one of the biggest relationship killers identified by two of the world’s leading marriage guidance experts, and how to avoid doing it, then read on. 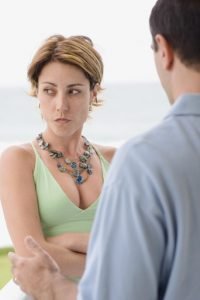 As far as Paul was concerned they’d managed to go without arguing for over a month which appeared to be a total breakthrough given the level of friction previous to my coaching.

However, his wife Serena was less than thrilled with what she referred to as, ‘his continual withdrawal’ and, ‘running away from the relationship’. If anything, she was even more ready to end their marriage than she’d been before they started marriage guidance.

It’s not exactly a secret that men tend to withdraw when they feel under attack. It’s been referred to as ‘retreating into his cave’. Women have a version of this behaviour that’s a little more subtle where they give their man the silent treatment or the cold shoulder, or even, as my dad used to call it, ‘put him in the dog house’.

People can do this for hours, even days at a time and if done regularly it can be very destructive in a relationship. In fact, it’s so destructive that it makes it into marriage guidance expert John Gottman’s list of four things guaranteed to destroy a relationship. Gottman calls it ‘Stone Walling’. Terry Real has a list of 5 things that will kill off a relationship and ‘Stone Walling’ is on his list too. Clearly it’s a massive issue that’s been driving partners nuts for the last hundred years or so.

Why do men do that?

As a gross generalisation it tends to be men that live in an emotionally walled off state leaving women to pursue them. Occasionally I’ll work with a couple where the dynamic is reversed, but for this article let’s talk about Paul. For Paul, arguing was ‘beneath’ him. He felt like it was messy, unnecessary and would do anything to avoid it. He’d been avoiding arguments all of his life and he’d adapted the ‘timeout’ tool to legitimise his withdrawal.

Paul had watched his parents fighting in some fairly spectacular ways as a child and had promised himself he’d never end up in the same situation. His parents were very unhappy and on at least two occasions he witnessed his mother throwing crockery at his father. It’s hardly surprising that as a result Paul decided that all arguing was bad, potentially dangerous and best avoided.

He’d rather be alone in his garage than risk Serena being mad at him. What Paul and so many other people need to learn is that sometimes people argue to come back together and that not all ‘fights’ are bad. His choice to live behind his emotional brick wall left him protected, but entirely disconnected from Serena. Serena was left feeling very alone and miserable as nothing she said seemed to penetrate that wall, except the very worst kind of behaviour on her part. Throwing pots and pans at him was rapidly becoming a tactic she’d consider using to get him to re-engage with her.

It’s my belief (contrary to popularly held opinion) that men are at least as emotional as women, maybe even more so. Men have just never been taught how to deal with their emotions in a way that allows healing, so they tend to run away from them. When a man dashes off to his ‘cave’ (things like slamming doors on his way out, turning on the television or locking himself in the bathroom) it’s because on some level he’s too scared to stay because he can’t deal with the level of feeling that may be coming up for him.

That wall he puts up leaves him just as lonely as his partner but the loneliness is preferable to what he fears may happen if he stays open and therefore vulnerable.

Why it’s a losing strategy.

Paul needed to learn that his withdrawal was a losing strategy that was at some point just about guaranteed to leave him alone again. He needed to understand that sometimes Serena was going to say something that he’d feel was a criticism and he had to be big enough to deal with that.

Sometimes she may even be mad at him, but it didn’t mean she’d stopped loving him. Paul needed to understand that healthy couples did fight, in fact sometimes a couple with very high standards will fight a lot as a way of establishing healthy boundaries between the two of them.

Used properly the ‘time out’ tool is one of the most important marriage guidance skills to learn for a healthy relationship. It’s very quick to teach and will without doubt change your life forever should you take the time to use it properly. Let me show you how to avoid making the mistakes Paul used to make.

A ‘time out’ is, as you’ve probably guessed, a way of inserting some space into a discussion when you feel like either you or your partner is about to get nasty. Used correctly it’s a great tool, used badly it will destroy a relationship.

What we’re talking about here is the difference between what relationship expert Terry Real calls ‘responsible distance taking’ as opposed to ‘creating a rupture’. The most important thing for you to know is that if one of you is calling a ‘time out’ then you must also agree to a ‘time in’.

It’s important to reassure the partner being left that you will be back and the subject will be discussed. Generally this should be 20 minutes later. If after 20 minutes one of you is still too ‘hot’ to talk about it then you briefly check in with each other and say it’s going to be another hour or so.

If after that time you’re still not able to talk in a compassionate tone then it’s time to take a couple of hours. Sometimes you can get so badly triggered that it takes a day or more to calm down again. It’s pretty normal, try not to get overly concerned about it.

As a result of his revised understanding Paul made some new agreements with Serena. The first was that if he was tempted to dash off to his garage he’d make it an official ‘time out’ and let her know he’d be back. 20 minutes was his minimum cooling off period.

He also came up with the idea of a ‘soft timeout’, which I really liked, where if they couldn’t be trusted to talk to each other they could still sit on the sofa together and watch an episode of one of their favourite shows. What’s great about that was it maintained a level of love and connection even if on some level they weren’t happy.

For Serena the most important change was that she was no longer left feeling like Paul was contemptuous of her every time she was upset with him. As a result she felt a lot less abandoned and insecure about the future of their marriage. She also felt a lot more empowered to challenge the things that were slowly driving her insane around him and driving up her resentment levels. In short, she could stop being quite such a nag because she now knew Paul was going to listen.

Paul and Serena are much happier now. Serena feels like she now gets heard most of the time, even if they need to time out a couple of times to get to the end of some discussions. Paul was also feeling better as he realised all the time in the garage and running away from Serena he’d been pretty much lonely and miserable.  I knew Paul was really getting benefit from our marriage guidance when he said he realised sometimes he and Serena would argue as a way of coming back together, they’d argue towards each other. Now that’s healthy!

With 20 years of experience, and having travelled the world for the best training, I’m close to certain that I can show you where you’re getting it wrong in your relationship.  If you or anyone you know is struggling then this 3 minute video will be really helpful. It’s halfway down the page.

Tips on dealing with arguments

Love and anger are separate and equal emotions. On some level the willingness to get into conflict demonstrates that you value and trust your partner enough to show them your pain. Withdrawal and stonewalling give out the opposite message. Someone being angry with you doesn’t mean they don’t love you or that you’re bad, they’re just angry with you. That said, for legal reasons, let me just point out that there is a world of difference between anger and rage. There’s no excuse for abuse, you’re going to need help with that.

Sometimes you may need to put a discussion on hold for a day. If something’s been recently triggered it doesn’t take much to set it off again. Just aim to reconnect to your feelings of fondness for each other in some way. If you are going to be apart do not get caught up in ruminating on why your partner is the world’s biggest pain and how you’d be better off on your own. Computer games, puzzles, walking or making a sandwich are all great ways of switching the track your brain may be stuck on.

The best books I’ve read about how to understand and manage conflict in a relationship are ‘Ten Lessons to Transform Your Marriage’ by John Gottman and ‘The New Rules of Marriage’ by Terrence Real. Both of these are life changing relationship books full of workable solutions for most of the struggles you’ll face in any relationship. If you’re just buying one then Terry Real gets my vote.