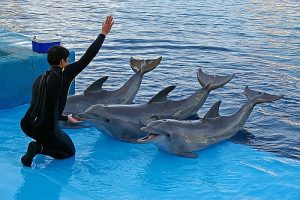 You are responsible for teaching people how to treat you.

When I was younger, and didn’t understand the political issues, I wanted to be a dolphin trainer. As a result I used to do a little work at a dolphinarium. At that point I had absolutely no idea the lessons my fish eating friends were teaching me that we could all apply to the challenges our marriages can present.

How is your relationship going right now? I know I use the word ‘marriage’ a lot in my writing, it’s not meant to offend. I am of the opinion that the fact you haven’t got your relationship rubber stamped doesn’t make it less of a marriage.

As you probably know dolphins are very smart and love to play games. When I began feeding them they’d come right up to the edge, however over time they began to move a little further away. It started out with me having to straighten my arm a little more but quickly progressed to me leaning over the pool trying to reach them.

At this point it all seemed innocent enough, I mean let’s face it, dolphins are amazing and any contact with them is good contact. I was willing to forgive them their laziness as I felt privileged to be able to play with them. It struck me recently that this is how we feel at the beginning of any relationship that excites us.

Stop the over reaching.

In the beginning of a romantic relationship both parties are only too eager to make a great first impression. You’ll literally bend over backwards if that’s what it takes to make the object of your affection happy. In fact the more excited you are by them and your potential relationship with them the more spectacularly you’ll perform. This is natural and normal in the infatuation phase.

Let’s face it, with all those feel good hormones racing around in your body you’re eager to find new and interesting ways to burn off some energy. ‘Sure I’ll pick up your dry cleaning’, ‘Don’t worry about it honey I’ll fix your gutters for you’ and the classic ‘I love your parents. Why don’t you just have them stay the whole weekend?!’ Whilst this phase is great it has little basis in reality. This early you are both stoned on the finest opiates that nature has to offer and relationship problems just don’t seem to register.

Suddenly it all changed.

The next phase starts the moment one of you begins to wonder if all of the giving and taking is equal. Things that had previously only been mildly annoying now start to really bother you. Still, you’re both having such a good time that you still let it go. I hear a lot of different reasons for this and it seems to come down to this phrase. ‘I don’t want to make a fuss because it’s not that important. Well the ‘it’ that you are talking about is you and you need to know it’s essential that you start to value yourself more highly.

My recently formed relationship with the dolphins wasn’t going so well. I could not understand why when everyone else fed them they’d come right up to the side. Not only that, but they seemed to respond better to instruction from the other trainers.  Fortunately I spoke with the head trainer about this who started to laugh. It turned out that Betty, Sharky and Flipper did this with all the newbies. It was a game they played and nothing about it was accidental. The name of their game was ‘let’s get the new guy in the pool.’

It turns out what generally happened was that when they had the trainer far enough out over the water they’d give his fingers a tug and in he’d go. Mid December in the UK this wasn’t as much fun as you’d think.  They were smart enough to test me and see how far I’d extend myself for them.

Once I was clear about what was going on here my life suddenly became much easier, they weren’t just being cute, they were setting me up on a path where they had all the power. Fortunately this was a fairly easy fix because I was the one holding the fish. And if there’s one thing that dolphins want more than anything else it’s fish!

So if you’d like to nip those relationship problems in the bud maybe it’s time to start retraining your loved ones. Basic behaviour modification goes like this.

Real world example; how to stop picking up his socks.

I have a client called Sarah whose husband could be a bit of a slob. The two things that used to bug her the most were his tendency to leave his dirty socks spread around the house and his habit of leaving the skins wherever they fell off the citrus fruit he ate. Unsurprisingly, this used to drive her nuts.

When I told her that it was her own fault Sarah was fairly affronted, which is a predictable response. But let me explain. It’s all about boundaries and communicating clearly what is ok with you and what isn’t. In the beginning of the relationship his abandoned socks used to bother her but she found it kind of cute because she was thrilled to have him around. So it was never discussed and became a norm in their household.

This is exactly how your bigger relationship problems begin. A couple of times she’d talked with him about it but nothing ever changed, partly because he knew full well that it bothered her enough that she’d eventually pick them up for him.

So after a little coaching with me she made it clear to him that she was feeling sad and a little disappointed by his continued lack of co-operation. They reached an agreement that she would no longer be clearing up after him. So far, so obvious and still largely doomed to failure. Here’s the clever bit. Sarah figured out that the one place her man was fastidious about cleanliness was inside his car. They agreed that if it got to a point where she was so unhappy about the mess she was well within her rights to go dump it all in the car.

Where are all the fish?

What’s great about this is that there is no more emotional intensity around the issue as there is nothing left to discuss. Worst case scenario she just keeps dumping it in his car for the next thirty years. In reality it took two weeks to resolve once he realised Sarah wasn’t going to run around after him any more. For those of you that wonder the ‘fish’ in this case was his clean car and her increased levels of affection once he started clearing up after himself.

It’s my experience that any animal, including your partner, is much happier knowing where the boundaries are. I’m convinced that we are all very aware of the times that we are pushing our luck with people. People like to know what they can get away with and you are being tested, sometimes not so subtly, every single day.

Your job is to figure out what is ok with you and what isn’t and then communicate your expectations clearly. This way you can avoid some of the bigger relationship problems caused by going ballistic one perfectly normal day in the future. If after making a clear request the behaviour change doesn’t work your next challenge is to figure out what ‘fish’ you are holding. Find something that the other person is willing to do somersaults to get from you.

If you’ve been struggling with this for years then it’s unlikely you’re going to figure out how to fix this on your own. If you need help then please get in touch here. The most important point here is ‘people treat you the way you train them to treat you!’

You are responsible for how you allow people to treat you. This means you have all the power you need to make all your relationships work for you. Sometimes you just need to think it out carefully and get a little creative.

Intelligence and obedience are not the same thing. I was looking after a friend’s welsh terrier (that’s a dog) the first time this became clear to me. If once you’ve discussed the issue someone isn’t behaving in a way that works for you, it’s unlikely to be because they don’t understand, it’s because they have their own agenda.

Being punitive rarely works, it just causes bad feeling. Decades ago trainers made this mistake with dolphins. However, they have the option of deciding not to breath and killing themselves. Aim to reach an agreement that suits you both. If your partner isn’t pulling their weight around the home then have them agree to get a cleaner. If you’re sick of chopping all the veg. have them agree to pay the extra to buy it ready chopped.

It is really important that you reward good behaviour there and then. Do not save it up for a time when you can make a big fuss. We all need to know when we are winning. Dolphin trainers use a whistle so they can reward instantaneously and then back it up with a fish later. If your partner makes the bed one morning, reward her for it there and then. Throw her a fish!